I can’t believe it’s been three months already since I moved back to the UK and, alongside another author (whose name I won’t mention), I’m in a little seaside town on the south coast of England which we’ll call ‘Random-on-Sea’ – and absolutely loving it.

I found a flat a block away from the sea (that was it before I moved in) and now that I’ve got my computer at my desk and all my bits and bobs around me, I’m hard at work on the next novel. That’s the view from the little terrace and although the sea isn’t that colour every day (or most days, actually), it’s glorious down here. Truly. Like many English seaside towns, I imagine, it really comes to life in the summer (not sure what the winters’ll be like – check back with me in December) and at the moment, I’ve got no less than four cafés in-a-row to choose from at the bottom of my street when I’m having my mid-morning Americano.

My friends roll their eyes (oh, the life of a writer!) when they ring and I say ‘can’t talk, heading out for my coffee’ but in truth, having a mid-morning break is as much about getting out of the house and saying ‘hello’ to someone – anyone – as it is about the Illy. Although I wouldn’t swap it for all the world, having worked for so long in an office (well, a university) environment, there’s something about having a chat with colleagues (even if it’s only a moan) that I do miss – though with four cafés to choose from and four lovely owners to chat to, it’s a bit of a moot point now. 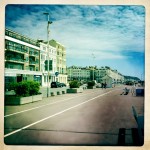 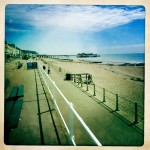 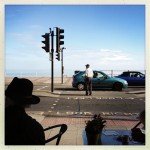 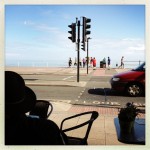